EXPORT PROMOTION OFFICE (EPO) – is an advisory and consultative body to the Ministry of Economic Development and Trade of Ukraine (MEDT) that was created by the Order of the MEDT No. 1861 as of November 3, 2016 as one-stop-shop to facilitate Ukrainian exporters get access to foreign markets.

The Office's activities began on December 2016 after signing the multilateral Memorandum between the Ministry of Economic Development and Trade of Ukraine and the Agriteam Canada project "Expert Deployment for Governance and Economic Growth" (EDGE) and the fund Western NIS Enterprise Fund, which finances reform delivery projects and initiatives in Ukraine.

In the context of EU-funded Program EU4Business in December 2017, the European Bank for Reconstruction and Development signed the agreement with the NGU "Foundation for Support of Reforms in Ukraine" on the delivery of the project “Ukraine: Consolidation of SME export potential and facilitation of access to foreign markets”, in cooperation with the experts comprising the working group titled Export Promotion Office of Ukraine.

The overall objective of the project is to improve Ukrainian SMEs access to export markets through:

EPO strategic goal is to improve Ukrainian business competitiveness on the international market by:

Key directions of the Office's activities:

The Export Promotion Office developed educational products for Ukrainian business circles and exporters. The Office organized thirty-four educational activities within the period of ten months. In November 2017, EPO launched the two-year two-tier program "Export Revolution" in partnership with the Government of Estonia. The Office also plans to open the Export Academy within the framework of the educational direction; the academy will focus on the development of human competencies in the field of export.

The Office organized eight trade missions and two exhibitions for one hundred and twelve Ukrainian companies in the countries of interest to Ukrainian exporters. More than one thousand business meetings abroad were conducted for Ukrainian exporters and more than 1500 foreign contacts were generated for Ukrainian producers for establishing cooperation between Ukrainian companies and foreign importers. In particular, five hundred Ukrainian manufacturers used the forecasts for nine foreign markets, as well as the export analysis, developed by the Office's experts.

Two hundred and sixty-five Ukrainian exporters benefited from export consulting services provided by the Export Promotion Office. For the convenience of exporters, the Office's experts formed the convenient portfolio of services that meets the Ukrainian exporters' needs. Forty-three Ukrainian companies benefited from individual consulting services, as they took advantage of the strategy development for entering new foreign markets to improve their export performance. The office also established the network of seventy-two highly skilled overseas and local consultants who provide services in forty-two states and who can provide Ukrainian producers with relevant data on business trends of a market they have an interest in. One hundred and eighty-five Ukrainian exporters used the new Enterprise Europe Network (EEN) tool that is aimed at export promotion; more than three hundred producers passed a test prepared by the EPO to define their readiness for export activities.

The B2G platform is designed as an effective platform for establishing a dialogue between the government and business. One of the B2G efficient tools is the Export Promotion Council coordination at the MEDT. Within the year, the community of more than 200 participants was formed on the basis of the platform with a view to establishing the efficient communication and securing effective response to requests from exporters. The community includes business representatives, central executive authorities, local authorities, associations, and chambers of commerce.

For the first time, the Ukrainian company won the GPA tender with the help of experts working in the direction of international public procurement. The GPAinUA team also helped the state-owned enterprise "SpetsTechnoExport" win a tender and sign a two-year contract with the European company. International public procurements open up to the Ukrainian companies access to forty-five markets with the volume of 1.7 trillion dollars.

The Office created the SheExports platform to increase women's participation in export activities for the purpose of developing Ukrainian economy through the improvement of their competencies in international trade and innovation entrepreneurship. In nine months the platfrom "SheExports" transformed into the full-fledged project that focuses on the popular development directions that women entrepreneurs are concerned in. In the summer of 2017, the Export Promotion Office, under the SheExports platform, became a verifier of the SheTrades initiative of the International Trade Center (ITC); the initiative is aimed at uniting one million women entrepreneurs from all over the world by 2020.

More information about the Export Promotion Office activities in 2017. 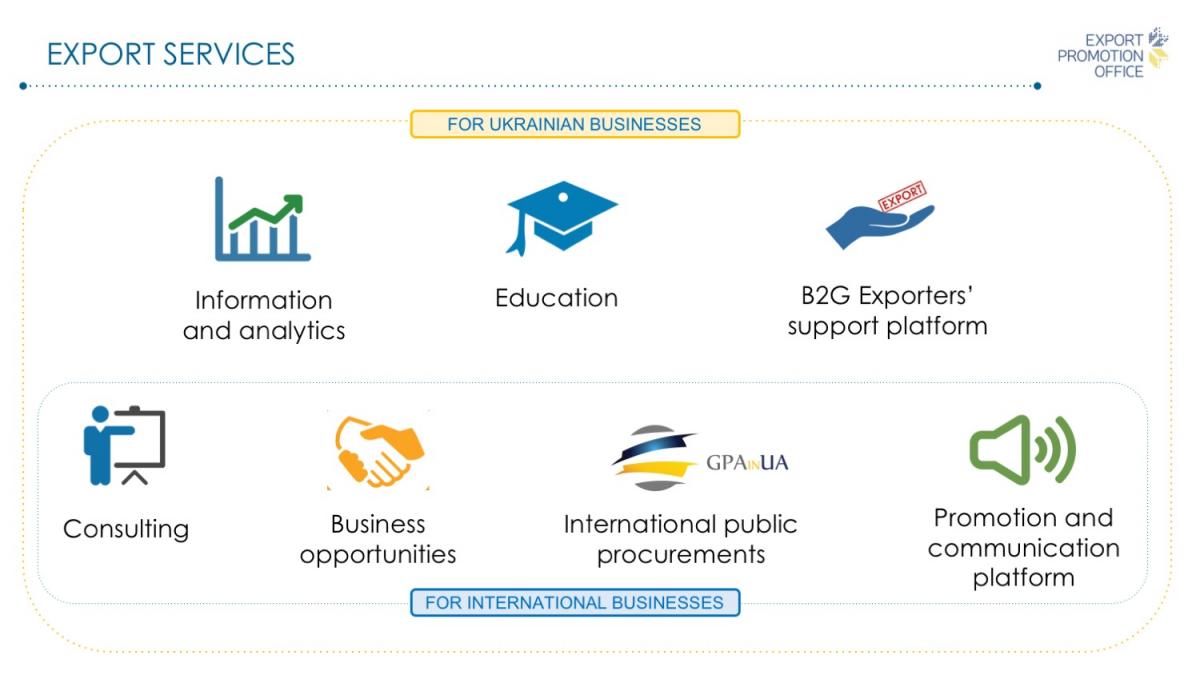