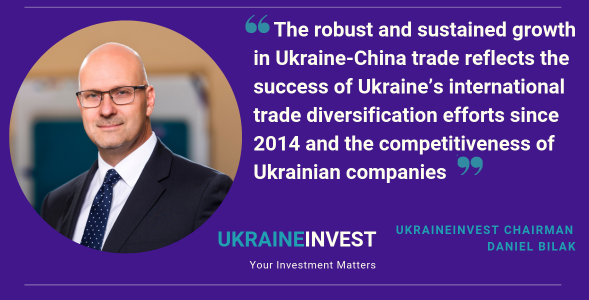 Bilateral trade between Ukraine and China totaled USD 5.8 billion during January-August 2018, representing a 21% year-on-year increase on the figure for 2017. This strong growth places China among Ukraine’s leading trade partners and puts the two countries on course to pass the USD 10 billion barrier within the coming few years. China has been a key focus as Ukraine has sought to broaden its export horizons since 2014, with Chinese consumers warming to Ukrainian agricultural exports in particular. Bilateral links have also benefited from growing Chinese investment in Ukrainian infrastructure projects as part of Beijing’s strategy to strengthen trade routes linking Chinese and European markets. With economic ties between the two countries deepening, Ukraine’s Minister for Economic Development and Trade Stepan Kubiv in early November invited his Chinese colleagues to begin joint consultations on a possible China-Ukraine Free Trade Agreement.

A long-awaited free trade agreement between Black Sea neighbors Ukraine and Turkey is expected to be signed before the end of 2018 following early November talks between Ukrainian President Petro Poroshenko and Turkish President Recep Tayyip Erdogan. Over 95% of terms have been agreed, with remaining issues revolving around Ukrainian agricultural exports to Turkey and Turkish textile exports to Ukraine. Bilateral trade between Ukraine and Turkey is currently growing at an annual rate of approximately 20% and is expected to reach USD 4 billion in 2018. Turkey has also emerged in recent years among the top five investors in Ukraine with one of the country’s fastest-growing business communities. As free trade negotiations with Turkey near completion, Ukraine also plans to conclude a free trade deal with Israel by the end of November 2018.

The Ukrainian branch of French multinational foodstuffs producer Danone has begun exporting yoghurts to Poland following a request from the Polish side. Weekly shipments currently total 20 tons, with plans in place to expand Danone Ukraine exports to other EU markets in the coming months. The company also currently exports sour cream and yoghurt-based beverages from Ukraine to the United Arab Emirates. Danone Ukraine exports are produced at the company’s Danone Dnipro plant in southern Ukraine’s Kherson Oblast. The French giant is one of a number of multinational foodstuffs producers now exporting from Ukraine to global markets. For example, Switzerland’s Nestle exports a range of Ukraine-produced goods internationally.

Ukraine saw a 13% year-on-year rise in pasta export volumes during January-September 2018 to reach a total of more than 19,000 tons, according to data released by Ukraine’s Food Export Board. Due to rising international prices, this increased volume represented a 19% rise in the value of pasta exports compared to the corresponding period in 2017 to reach a total of approximately USD 28 million. The largest individual market increase came in pasta exports to Germany with export growth of 26%, followed by Russia (23%) and the United Kingdom (9%). At present, the top five importers of Ukrainian pasta are Russia (17% of total exports), Moldova (12%), the United Kingdom (10%), Germany (9%) and Romania (6%).

Ukraine’s Economic Development and Trade Ministry has established a new Development Office for the country’s small and medium-sized businesses (SMEs) in a bid to improve coordination of ministry support for the sector and boost international competitiveness. The new Development Office enjoys financial support from the European Union within the framework of the FORBIZ project and EU4Business initiative. It will have a strong regional dimension, with initial plans including the creation of business support centers at the regional and local levels. Additional focuses will include Ukraine’s vibrant startup community, with the Development Office set to offer training and financial support programs for startups as part of the National Entrepreneurship Development Program. The creation of the Development Office is part of ongoing efforts to enhance Ukraine’s entrepreneurial environment. Ukraine climbed five places in the latest edition of the World Bank’s annual Ease of Doing Business ranking and currently occupies seventy-first position.

In an indication of the increasingly international outlook of the Ukrainian business community, the country’s European Business Association (EBA) announced in early November that it had reached a historic landmark and welcomed its thousandth member company. EBA officials confirmed that Kyiv City Airport service company Master-Avia became member number 1000 in late October and was one of 21 companies to join the business association during the past month. The EBA is one of the largest and most prominent international business associations in Ukraine with a membership representing companies from 59 countries.

Ukraine’s airports maintain strong growth in passenger numbers
More than 15 million people flew via Ukrainian airports in the first nine months of 2018 as the country’s air travel industry continued to expand at an unprecedented rate. Ukrainian airports handled 15.6 million passengers in the January-September 2018 period, representing a year-on-year increase of 23.9%. Kyiv City Airport was the standout performer with passenger growth of 57%. Meanwhile, smaller regional airports also impressed. Chernivtsi saw a 55.3% rise in passenger numbers and Kherson posted 51.1% growth. The busiest Ukrainian regional hub in terms of passenger volumes was Lviv, which witnessed a 46.6% increase in travelers and a 28% rise in the number of flight services. Lviv International Airport’s growth trend maintained its frenetic pace in October 2018, with a 43.4% year-on-year jump in monthly passenger numbers to 1.355 million.

Odesa International Airport runway upgrade expected in first half of 2019
Work on new runway facilities at Odesa International Airport is expected to conclude in the first half of 2019. Officials reported in early November that during the September-October 2018 period, work on 800m of the planned 2800m runway was completed. Financed with state budget funds, the runway upgrade will open Odesa International Airport to new categories of international flights, with a new terminal building already in place offering the possibility to expand flight and passenger numbers significantly. The Ukrainian Black Sea port city has experienced a boom in tourism since 2014, with domestic Ukrainian tourist flows redirecting to Odesa following the Russian occupation of traditional Ukrainian holiday haven Crimea.